Visiting a church after another church gave me the possibility to discover or rather to rediscover the sacral dimension of our humble existence in this world. This was a unique chance one can’t have pretty often in a life.

If the first 2 churches visited in Florence were big, impressive, majestic and representative in their own way for the renascence period, going to The Cathedral, named in honor of Santa Maria del Fiore was a real surprise. The simplicity was stunning, the size was incredulous, the richness of the outside decorations had nothing in common with the indoors modesty.

Once you put your foot inside of The Cathedral, you can feel the true vibrations. It is giving you a new perspective, or rather an old one. This is a real space for praying, even though you came here with no intention of staying for this reason. The warm atmosphere inside invited me to come in and sit, to think more about what I can do, where I came from and where I can go; this was something that truly connected me with some other higher level that had awakened my spirituality, making me wonder things I might have or not, or deeply hidden in my subconscious. I wanted to move on, but something was holding me a little more than I had planned. I didn’t know if my feet were heavy or my heart was light, I could do nothing else than taking a seat and blending with the moment. And be happy.

I was not sure if the quiet call I felt was generated by the religious nostalgia or just the reflection from my unspoken wish of living in a pure and innocent world, in a sacral and genuine environment, exactly as it was in the primordial times, at the beginning of the world, when everything had been just created.

Each experience of our life with its own meanings has divagated and redirected us to many different ways of knowledge, but at some point we start to understand that sometimes there is a moment when we need to sit down, and leave our day to day thoughts float away, and instead, to turn our face toward divinity, or wonder if divinity itself is turning our steps in such a manner that we have to confront such feelings from time to time.Different questions overwhelmed me: is the light and purity I feel coming from my desire, from some sort of hunger, from necessity, or is the sanctity of this sacred sanctuary washing our sins and purifying our souls and minds?

My eyes didn’t seem to leave the altar, I wished to stay a little bit longer, which I did without doubt since I was attracted like a magnet, and I felt like a helpless moth in front of a night light. 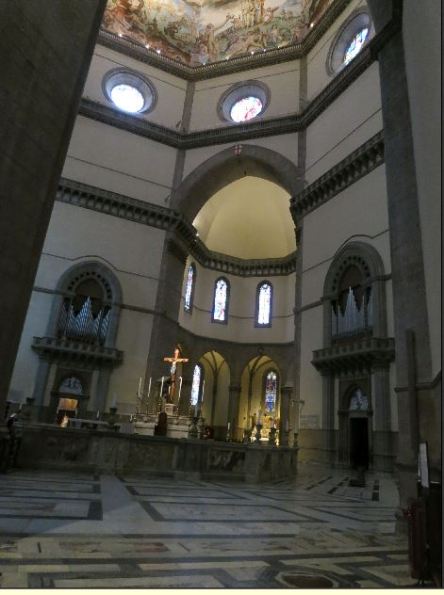 In between of all these thoughts that I had a little chance to ponder about, my sub-consciousness noticed also a little the frescoes, the mosaic, the floor, the stained glass, the statues, and even Brunelleschi himself that is still admiring his own work.

Until I did start climbing the dome and getting to the first ring at the middle of my own challenge, I didn’t fully realize what I was doing. It was only then that I got a grip of understanding.

Looking down through the plastic wall gave me the first dizziness, along with a sense of the purpose of this temple, of this House of God, Cattedrale di Santa Maria del Fiore. I realized how little we, the human beings, are, when prostrating in front of divinity. I could barely see the pattern of the marble floor, the benches with people that looked like miniatures; I saw the simplicity as a whole, and the gothic structure with a view of the whole nave.

But when afterwards I raised my head and I could see the gate to the other side of the world, the upper one, I did wonder if I have just started climbing the Axis Mundi, but also that I will never be able to reach the gate since it’s so well defended by all the angels, saints, spirits, and cherubim. And of course, The Last Judgement so well painted at the right place is guarding the light we can see on the other side of the gate, the light that is unifying the Sky with the Earth, between the Heaven and the Earth, the light that is illuminating all of us, and that is shedding a new perspective for us, people, to a new dimension of this life.Looking at the details, I realized that the truth cannot be avoided: the same as the blessed and the damned are ascending or descending; the souls of humans rise or fall to their fates.

Continuing to climb was my fate, as there was no way back. Even though we started to climb at an early hour, in the fresh air of the morning, I was tired already when we stopped at the first parapet, which gave me time to catch my breath. That’s a wrong way to say that, when really, I actually forgot to breathe, being astonished by the beauty of the frescos from the Sky above.

While my body was screaming for a break, my soul was telling me to keep it up. As I went higher, the air became thinner, the stairwell tighter, the legs shakier, but I was still lucky since from place to place there were the little vents where I could still see the blue sky and the sunny day outside. I didn’t have time to think of how this stairwell was built, as one can see big variation in the wall thickness, nor to count the steps. The only thing I knew was there were over 400 steps to climb in total, and that I need to climb them all.

Nothing is holding me, and finally I am at the top; getting outside of the trap was such a great relief. All was marble, the terrace floor, the pillars, and the whole lantern exterior placated in polished marble. I wonder again how such a miracle was built so many years ago.

Looking around at all the red roofs surrounding the Cathedral, noticed that Florence is located in a basin surrounded by the hills in the distance. There are churches all over the place in between of all the red roofs; however I was above all, facing the clouds and the hills.

Stretching my arm I was trying to touch a cloud, but my hand only touched thin air, I was simply feeling like I had arrived in Heaven, the Sky was all around me. 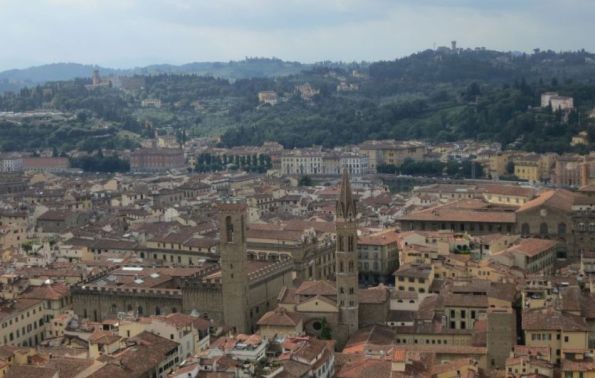 The breeze and the wind were drying my face, the sun still covered by clouds, and found myself stunned by how close I am to the clouds. Going to the parapet rail to inspire the air; I felt like I have reached the door of the Paradise. But nothing in my hand, I just caught a chimera.

Later on, after I came back in my own shoes, I did wonder how much faith the Florentines had about 700 years ago, so they could get someone able to build such a great Dome for their church, the still largest masonry dome ever built. 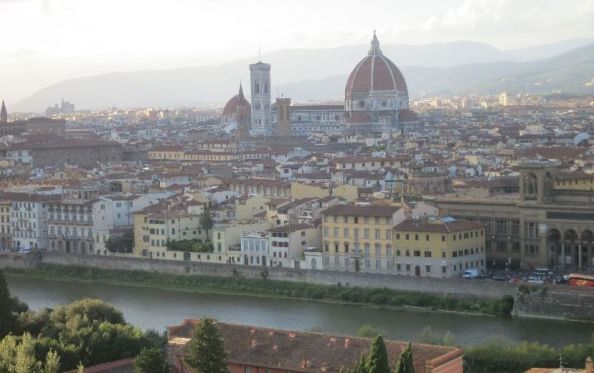 One thought on “IT, Florence: The Cathedral of Saint Mary of the Flowers – Climbing the Dome”