In case someone is wondering if five days were enough to visit these two cities Vienna and Budapest, the answer is not, 5 days is way too little to visit them, but I think it is enough get a glimpse of a great heritage of Austro-Hungarian Empire. You can read here the first part of this post. Today I will continue, and talk a bit about food, Danube River and churches. 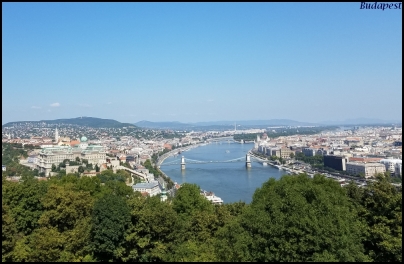 With Strauss’ famous Blue Danube on our mind, we decided we want to take the 1-hours city cruise that is included in the pass anyway. After few torrid days of walking in Vienna, the cruise came as a blessing. Who can resist a visual show while sipping a cold drink? We didn’t know what to expect, and we especially had a hard time finding the right departure dock, and the place where to get the ticket from (like most of the attractions included in the pass, you still need to obtain a free ticket showing up the pass). After hanging around on the riverside back and forth, we finally were directed by a local to the big boat-building to get our tickets. The dock we were looking for was right beneath the building, and a huge line was already there by the time we had our tickets. But we easily were boarded on, since half of the people didn’t know they need or where to get the free boarding ticket from, and they had to leave the queue. The cruise goes along the Donaukanal – Danube Canal, a former natural branch of the Danube, today a channel going through Vienna city centre. Place for gathering, and hangout, the waterfront looks like a busy place in Vienna. With tourists around or not, people are still living their lives, sunbathing, fishing, reading, or biking. Beside few modern hotels, and buildings, our attention was captured by the colourful riversides, a true art gallery. The tall, dark, and endless walls of the channel look like were specially built for these paintings. Or rather waiting for them. From murals to scribbles, from names to characters, this type of street art gives a special, unique personality to the river. With different styles, and motifs, each layer of paint is showing a new age, or a new message. It keeps the river alive, and the city spirit free.

The Budapest cruise we picked at sunset time has a different story. A new experience in a new city. Like Cinderella, Budapest is all dressed up after dark, when the city starts glowing under so many lights. A live city, with many restaurants and terraces, cruising is the best way to see the sparkle of the city, when all the twinkling lights are reflected in the Danube River. You can read more about here.

“There is no love sincerer than the love of food,” George Bernard Shaw

The name Wiener Schnitzel (meaning ‘Viennese cutlet’) first appeared in the 19th century, with the first known mention in a cookbook from 1831. It is one of the best known specialties of Viennese cuisine, and one of the national dishes of Austria.

Although paprika is often associated with Hungarian cuisine, the peppers from which it is made are native to the New World. The seasoning is also used to add color to many types of dishes, as it is made from various peppers, more or less hot.

The first recorded use of the word paprika in English is from 1896, although an earlier reference to Turkish paprika was published in 1831. 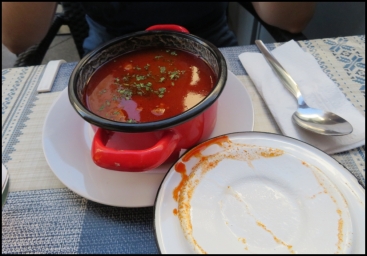 Stephen (Stéphanos in Greek meaning “wreath, crown”) was a deacon in the early Christian church in Jerulasem who was accused of blasphemy by the various synagogues. Being sentenced to death by stoning, he was the first martyr of Christianity that was venerated later as a Saint.

Important name in European culture, we can see this name very often, and what were the chances we found 2 important cathedrals in both Vienna and Budapest to carry the same name of this important Saint.

St Stephen’s Cathedral (better known as Stephansdom) is the Mother Church of the Roman Catholic Archdiocese in Vienna. Since its foundation in 1137 until the last reconstruction after damages from WWII, the Cathedral’s Romanesque and Gothic styles, with its multi-coloured tile roof was developed and extended to what we see today. Standing tall at 136 m, the South tower is the highest point in Vienna old city.  Above the choir on the south side of the building the tiles form a mosaic of the double-headed eagle that is symbolic of the empire ruled from Vienna by the Habsburg dynasty.

Having the Vienna pass was a plus to our visit to the Cathedral, as it let us visit the treasure museum (which is full of relics) located at the upper floor, where we could see a lot of relics heavily decorated, liturgical books and vestments. We didn’t take the catacombs tour, but it is probably worth seeing that as well, since many famous rulers have found their final rest in there.

A famous landmark attracts many visitors of course, and we were lost between hordes of people at some point. We took our time to light a candle and had a quick tour of the church. But something was pushing me aside. I wanted to move on, but something was telling me this is not everything. Leaving the crowds behind, I had to sit down for a moment. Mixed feelings about life, fate, experience, knowledge, known or unknown pathways caught me off guard.  I had to recollect my own thoughts when I saw such immensity; I had to say a prayer when I started feeling certain vibrations and I realized the true purpose of this sanctuary.

Heavily ornate, with many beautiful intricacies, the cathedral is one of Europe’s gems which cannot be missed. I was myself overwhelmed when I visited this summer. I wish to have stayed a bit longer, to attend maybe to a concert. But this could be a reason for a next visit, for sure!

St. Stephen’s Basilica is a Roman Catholic basilica dedicated to Hungary’s first king Stephen I, who encouraged the spread of Christianity under his administration. This is one of the largest churches in Budapest, and it houses the right hand of Stephen I. At 96 metres, it is the tallest building in Budapest (along with the Parliament building), and the views from cupola must be rewarding, which unfortunately we didn’t have a chance to see.

Since completion in 1905 in a Neo-Classical style, this is one of the most important churches in Hungary. It has great acoustics, and holds organ concerts every week.  The day we visited the basilica they were making final arrangements in the front of the main entrance for a late concert we didn’t stay for.

The main entrance door, somehow hidden by the outdoor stage, captured my attention by the beauty of the 12 pensively apostle faces, guarded by the St Stephen himself, sculpted above the door. Holding his scepter and the cross, he was looking right in my eyes, reminding me somehow of an old pilgrim, the canonized version of him.

I was taken by surprise by the red marbled walls with the golden vaults and arches. Simple but intricate, plain but sophisticated, the sculptures around the church were few but a lot. Another St. Stephen from the main altar, much younger than the one at the entrance, but with a big golden hallo welcomed us to stay longer around, since we got in the church during a mass.

With 120 geothermal springs or so, Budapest got its popularity since old times, reason we wanted to visit Szechenyi Thermal Baths. It is one of the largest spa complexes in Europe, and very famous for its architecture, Neo-Baroque style. They offer so many services, as you might need weeks to try them all. Beside treatment with Kolop mud or with Hungarian wines (what?!..) they offer a guided tour twice daily. At least this is what they advertise on their website. But we got surprised when we got at the entrance and found out that the 4 o’clock tour was cancelled. With no explanation as to why it is cancelled, or if it will be rescheduled, we left very disappointed the building, especially due to the fact that we rushed some other visits for this special one. But not before enjoying the exterior of the building and the few intricacies at the entrance.

Totally different than the splashing areas that are built mainly for kids in Toronto area, these misting systems found in both Vienna and Budapest are very much used during a hot summer day. Maybe common for the people living in these cities, these systems captured my attention firstly in Vienna, where we could actually fill our water bottles. The misting button was on the side of the station and one could use it every time would like a misty breeze in the face, unless the wind would blow the mist wave in a different directionJ. The Budapest version was just for misting and it was working all the time; people choosing to walk underneath the misty cloud, or to go around.

Vienna TrinkWassers are very popular in Vienna; you need to have your own water bottle. 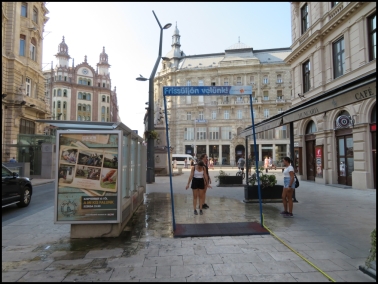 Walking aimlessly reveals the true way of living in a city.  I was very impressed about the newspaper stands found in Vienna. Different corners had different newspaper “stations”; who wanted to read one would just simply lift the cover, take a paper and leave the money in the attached box. Yep, that simple! Trust is everything, right?