How to Peru in 2 weeks, Day #3 – Miraflores and Barranco districts

The third morning in Lima was sneaking quietly, and we had to decide if we should visit some museums we had on our list, or get to Puente de los Suspiros (Bridge of Sights) in Barranco, while seeing more of the Lima’s street life.

The first stop was in Kennedy Park, so famous for its inhabitants: 60 cats. Located in the heart of Miraflores, the park is well known to the tourists, even though it looked like there were more locals at the time we stopped by. A little oasis in the middle of a bustling city, the park is much smaller than I imagined. Welcomed by a huge Pucara Bull, we had a chance to learn about this symbol, not knowing yet we will actually have a chance to visit the town of Pucara in the following week.

A little heaven and a big home for cats, the park is shared between cats, locals and tourists. No one knows how the cats originally came here, and one might get a wrong impression these are stray cats. Yes, they might be, but they look so healthy and well-tended, and I understood that the city has already sterilized most of them. We could see them hanging around, sitting on the trees, on the alleys, or mingling with people in the park. 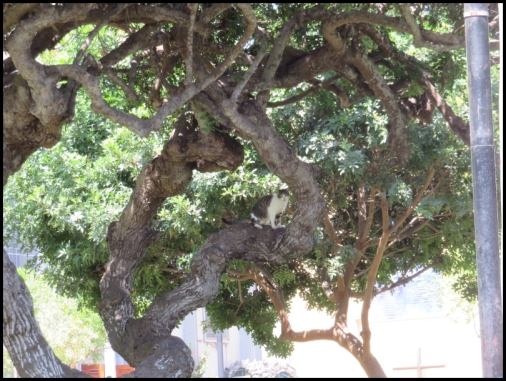 Lima-Kennedy park- cat in the tree

Lima-Kennedy park- cat in the park 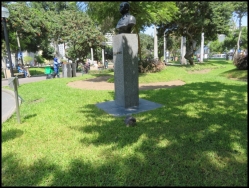 Lima-Kennedy park- cat in the park

Passing the Virgen Milagrosa Church, we continued our walk on Av Jose Larco, and later on some side streets, lost in the city. Somehow we noticed when we entered Barranco district, as the buildings changed their aspect, and the streets as well. 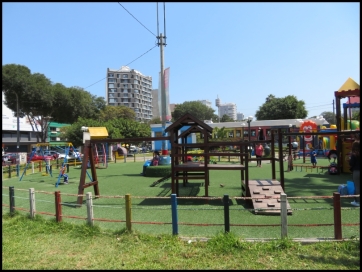 Barranco district is known as the bohemian district of Lima, known of its art galleries and charming streets. The modern buildings mixed with colonial and republican style houses (known ascasonas) captured our attention,

and we found ourselves right in the middle of Barranco Main Square, a cute plaza full of alleys and palm trees.

After a short walk we spotted the Bridge of Sights, a small bridge over a ravine, after which the name of the district was actually given (Barranco is the Spanish term for ravine). The bridge and the surroundings were pretty much deserted when we arrived, considering this is one of the main attractions in Lima. But we were glad, enjoying the serenity. After crossing the bridge there is a deserted church, with a lot of black vultures on the collapsing roof.

Lima, Barranco – view from the top of Bridge of Sights 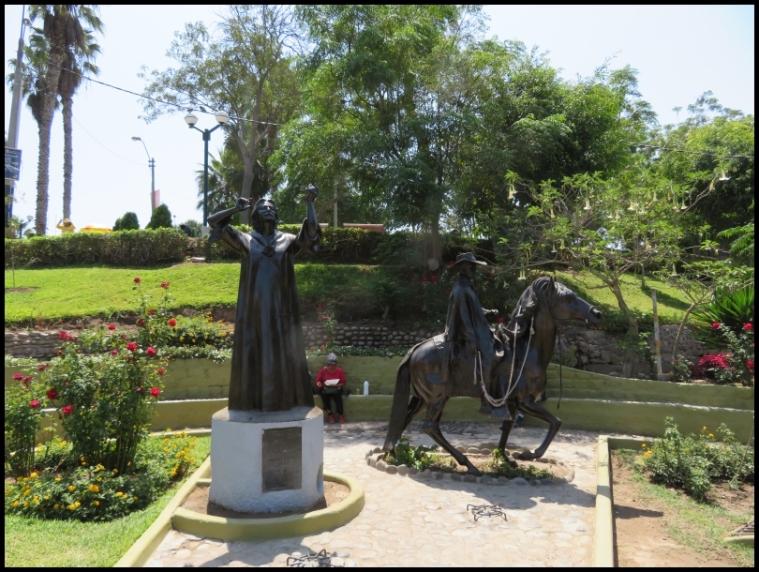 Lima, Barranco – On the far side of the bridge is a park with a statue of Barranco native singer and composer, Chabuca Granda.

Passing an alley, we found ourselves at the end of a path were we could get a glimpse of the ocean, with a narrow beach below the cliff.

We were really tempted to go down, but we quickly re-considered that we will need to climb the stairs back, and after 6 km of walking to reach this point our feet might get frustrated. We decided to go back to the Main Square, and find a way to return to Miraflores.  Finding a washroom was pretty difficult keeping in mind that most of the restaurants were closed before noon, but I took my chance to knock at all restaurants with an opened door. Looking for a taxi cab we suddenly found ourselves in front of Estacion Bulevar, a similar platform of the Metro bus that we used right the day before. Same method of payment, we approached a local for help, who willingly paid for us using his pre-paid card for our cash. We were so fortunate to encounter such amazing and friendly people, willing to help anyone!!

I think that one shouldn’t miss the shopping area in Lima, even if for a couple of hours, an open, free museum after all. We went looking for Indian Market, and we got confused by the multitude of stores, and markets in the area, and ended up in Inka Plaza instead, which we liked much more. There are many artisan markets selling nearly everything what Peruvian craftsmanship has to offer. You can get the typical souvenirs: beautiful silver jewelry, amazingly colourful clothes made of Peru’s famous alpaca, pottery, paintings, wood carvings, and pretty much everything you might think of. We had a lot of fun just observing the ingeniousity of some items, and also we tested our bargain skills. Everything is actually asked for a higher price, just for the purpose of negotiating. There is so much to look around and we discovered that Peruvian crafts are so appealing, with their native colours, shapes, and models. I do not normally shop a lot while travelling, but this time I couldn’t refrain from making a longer list. 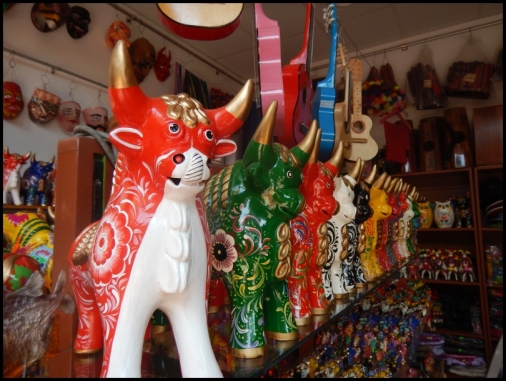 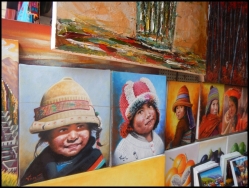 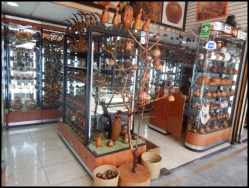 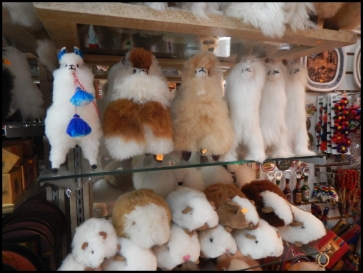 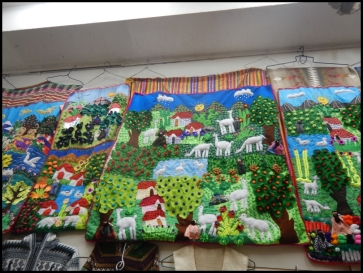 Gates and doors in Lima

Home of the oldest civilization in Americas, and one of the cradles of civilizations, Peru has one of the longest histories in the world. The Spanish Empire conquered the territories in the 16th century, putting an end to the largest state in the pre-Columbian America: the Inca Empire. With many wars, disputes, and internal conflicts, Peru has a long history of instability and insecurity since then. With a relative economic growth nowadays, the Peruvians still remember the terrorism days. Even though about 20 years have passed since those harsh days, we could still see the remnants of that time: a lot of metal rails, spikes, walls, electrified wires on top of the fences, crushed glass, guards, and security. 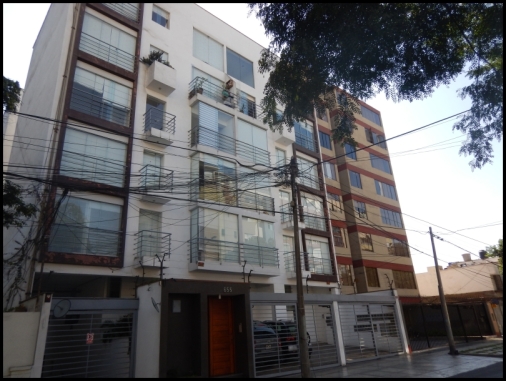 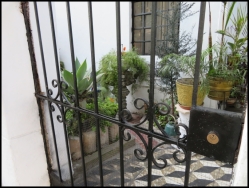 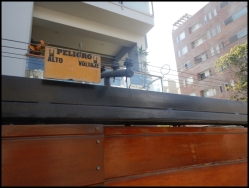 It is quite obvious which houses have more security measures, but even the poor ones have high metal fences, and a couple of locks. I felt safe walking on the streets, even at a late time. I was holding tight and watching all the time our luggage in the airport as I was advised by a friend, but I think that’s a basic rule everywhere in the world after all. I’ve heard rumours about certain parts of certain districts in Lima are more dangerous, but we didn’t have time to explore that much and we felt safe all our limited time spent in Lima, even though walking at very late hours on some streets not illuminated properly might have developed my imagination in a different way. Asking our host why so many locks and fences, even in Miraflores, the most touristic district of Lima, he answered that all these are a result, and a reminiscence of the terrorism days, when everyone was locking themselves inside while fights and battles were on the streets. But 20 years or so passed by since those days, and I wonder how badly this entire population was affected as they are still protecting from the evil, and they might live, subconsciously, in fear forever.

*Most of the vendors will sell you the souvenirs at a cheaper rate if you are their first customer, so better go shopping first thing in the morning.

*Never pay the requested price; you can get them cheaper if you bargain, in any market, but be aware if they are too cheap as they might not be original.

*If you are planning to buy souvenirs, Lima markets have reasonable prices. I found higher prices in Cusco, and Arequipa; and best deals at the stops along Cusco-Puno road: Andahuaylillas, Raqchi, Pucara, and the pass of La Raya.

*One cannot refrain from doing bird-watching in Peru, as it is a tropical country and there are so many birds everywhere. I will end my post with a photo of this delicate bird which never stops to amaze me.

13 thoughts on “PE, Lima: Miraflores & Barranco districts and other impressions”