Name of Athabasca has originated from the Cree word where there are reeds, and most of the Athabasca names are to be found in Alberta.

The Athabasca River, with its 1,538 km, is the longest river in Alberta, and starts from an unnamed lake north of Mt Columbia, on the west side of Mt Athabasca and Athabasca Glacier, flowing to the north, and ending into the Arctic Ocean. The first 168 km, located in JNP are designated as a Canadian Heritage River, for its importance to the fur trade and the construction of railways and roads. 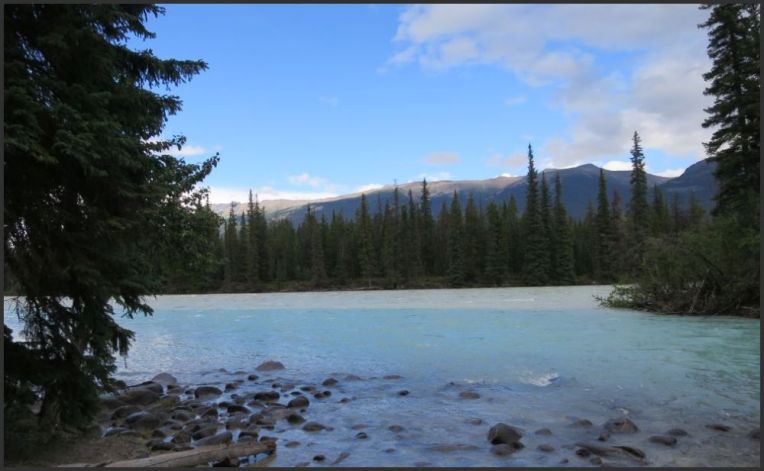 Wide or narrow, rapid or slow, the river has impressed me the most at one confluence, when a limy flow of the river met the main stream. Interesting to see how much these streams will flow together without really mixing up. So different and so alike; and this is the beauty of the Mother Nature, she knows wonderfully to bring and blend the things together. 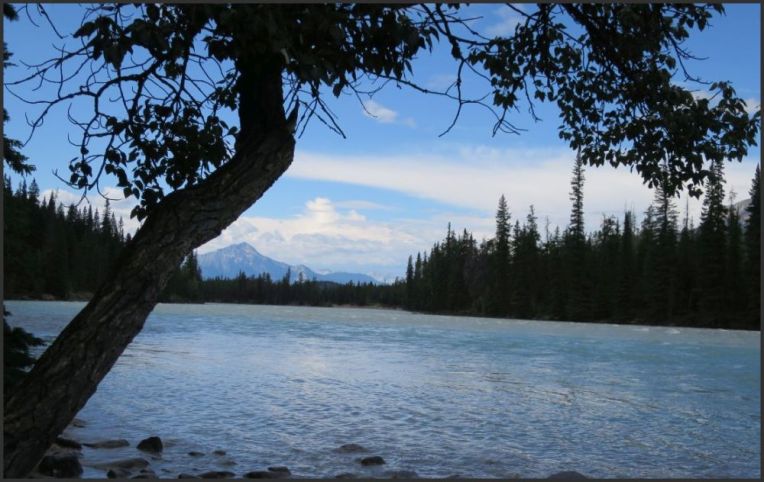 The most impressive part of Athabasca River is located about 30km upstream of Jasper, where the spectacular Falls of Athabasca are located. 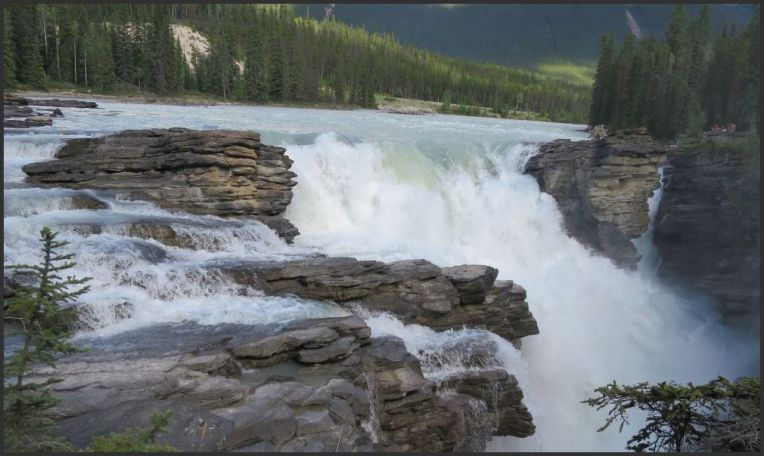 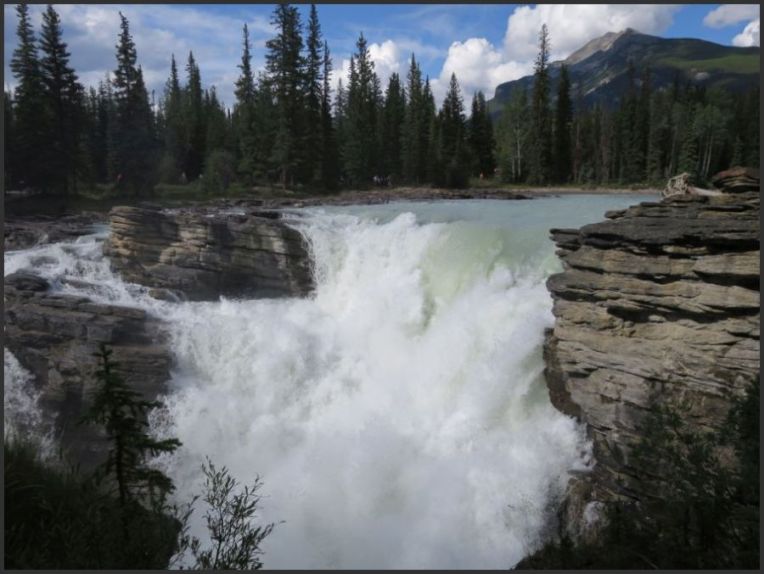 Only 23 m high, Athabasca Falls are so powerful and forceful that one can see at how much carving over time the river has done to the walls of granite, creating different shapes and potholes in the deep gorge. 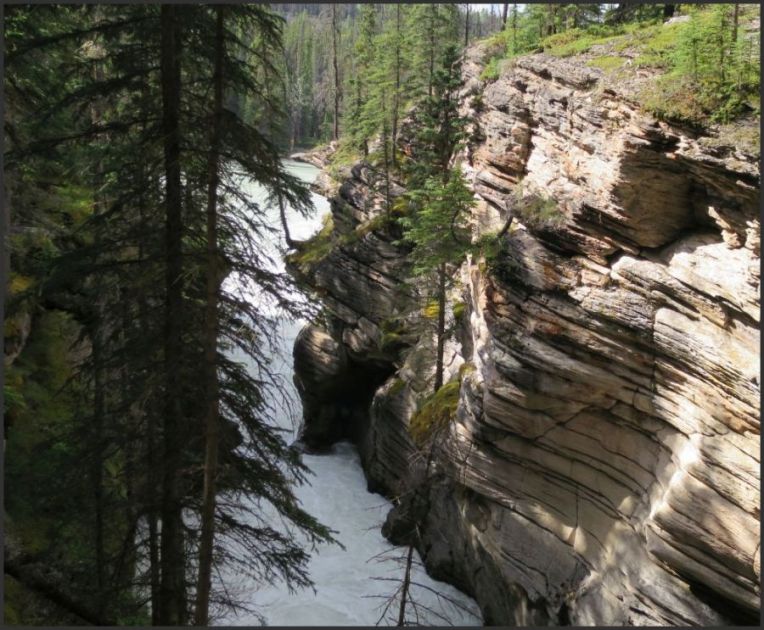 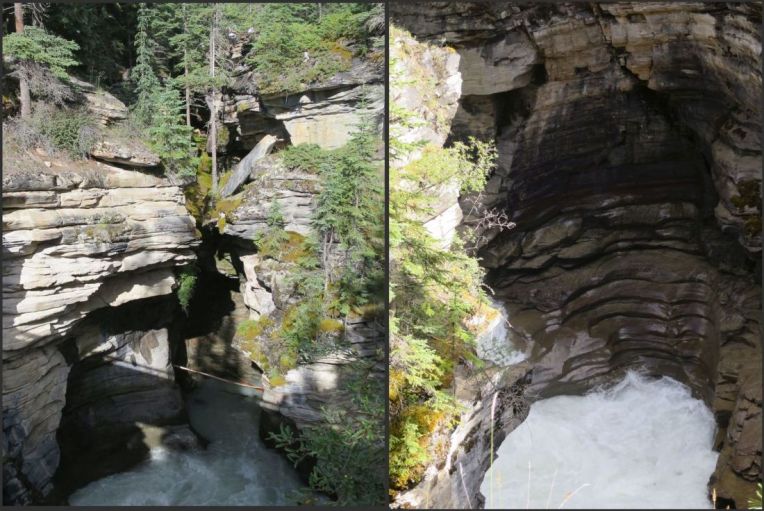 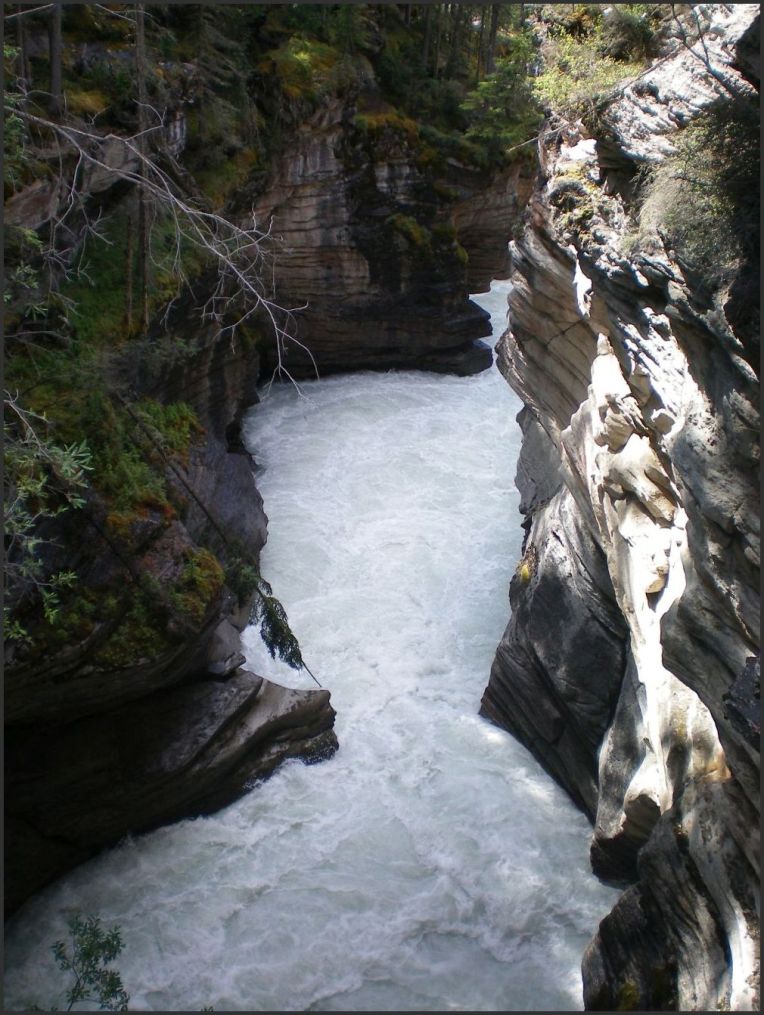 Splashes and rainbows at different times and different spots made the visit another wonderful place to feel the power and the thrill of the nature. 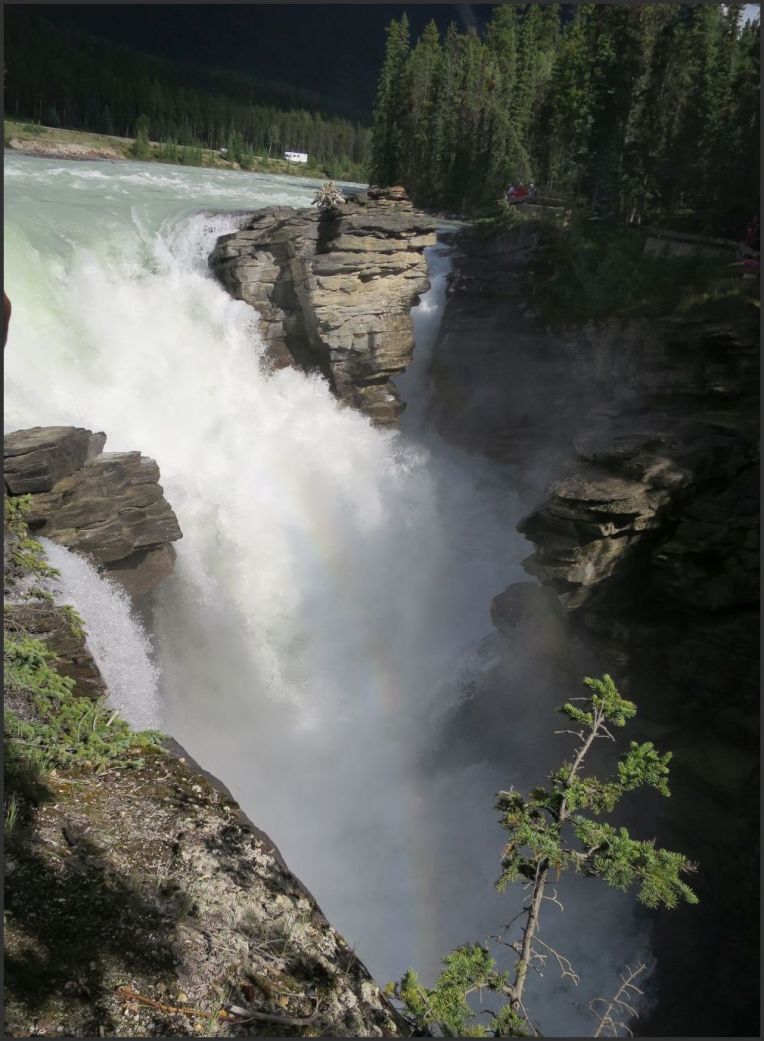 Athabasca Glacier, probably the most accessible glacier in North America, with its massive 6 km long and 1 km wide tongue stretches majestically within walking distance from the Icefields Parkway. The glacier can be viewed from the Parkway, or people can walk up the trail from the parking area to the foot of the glacier for a closer view, free of charge. But we decided we could not miss the adventure of riding and walking on the surface of the glacier, and chose the Glacier Adventure package, which includes both the riding the all-terrain Ice Explorer vehicle and the walk along the glass-floored Glacier Skywalk at the cliff’s edge over Sunwapta Valley. 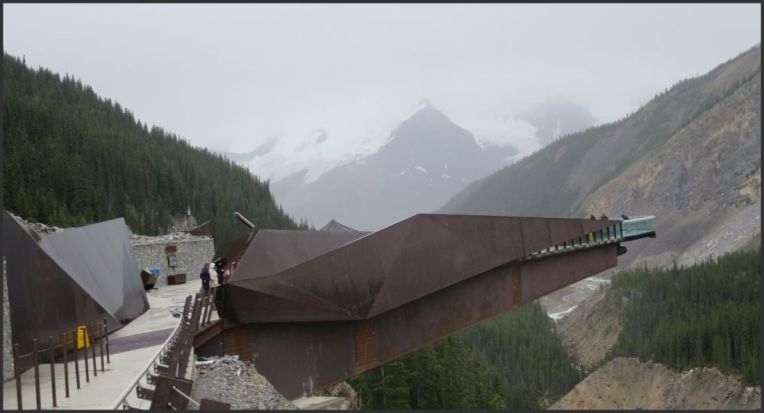 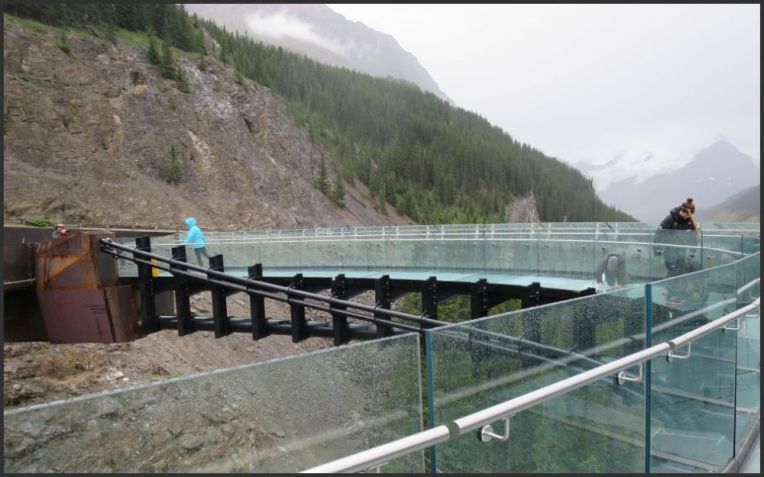 After missing the appointed time from the ticket because we were waiting at the end of the line, and didn’t hear the announcements (one need to be really close to the entry point to hear the staff), we had to reschedule for a couple of hours later. In this way we ended up going on the Skywalk first, and due to some mist appeared from nowhere, about 10 people and we had the whole Skywalk for ourselves. 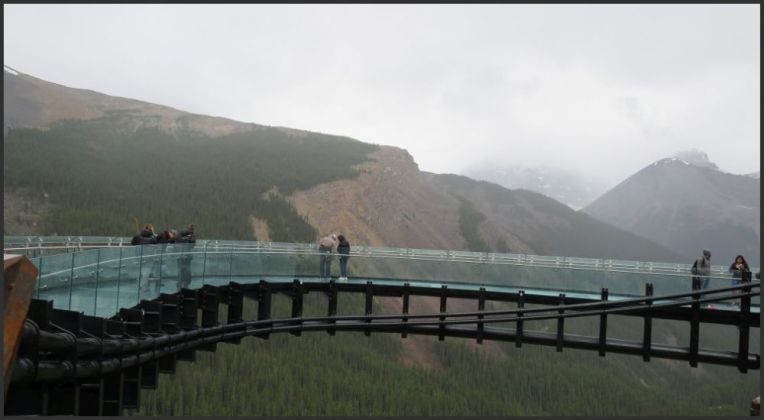 Which was actually the best thing for myself, since less vibrations while walking on the glass floor. Definitely the view could be better on a sunny day, nevertheless we enjoyed the top view and the whole valley entirely. 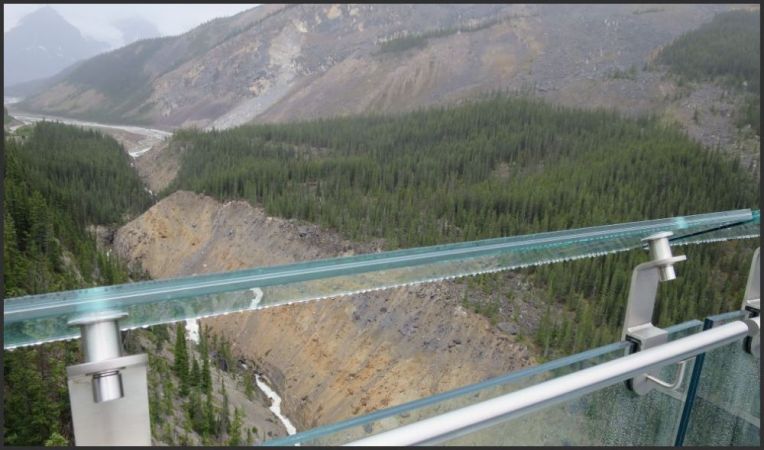 Second part of the adventure was much more thrilling: a bus took us to a meeting point to get into a gigantic Ice Explorer, which took us up to the glacier itself. 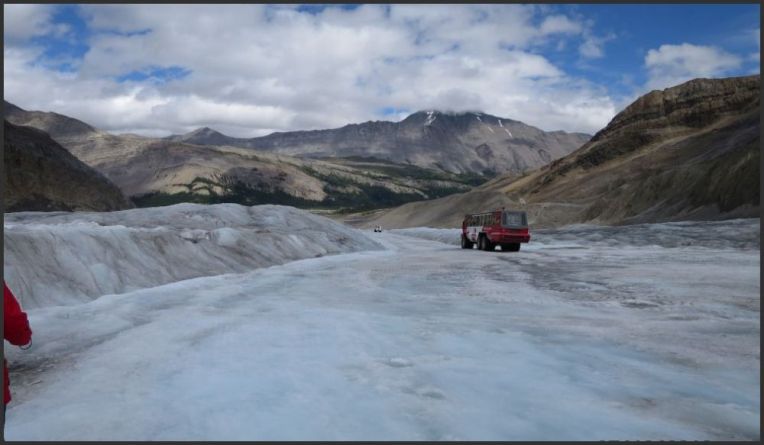 Big and slow, designed especially for glacier travel (with a cost about $ 1mil. to build an Explorer, accordingly with the driver), the vehicle has run on its way to the Glacier through a big puddle to wash its tires. We learned in this way that washing the explorer tires is helping to slow the melting process of the glacier. Actually it is truly amazing to hear how much this glacier is reducing its length, at a rate of several centimetres each day. We have been also told that each day new crevasses appear along the glacier, and each morning a security team is scrutinizing the visiting area, clearly marked with orange poles.

Going outside of this area is not allowed, and even there, all crew members are watching carefully and continuously the whole surface. 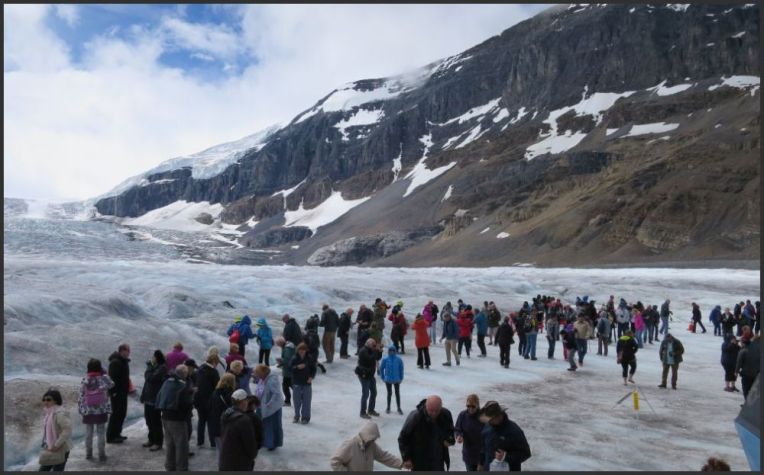 Most of the people did drink some melting water flowing through several cracks in the glacier. I personally didn’t dare to drink it, but that was very tasty so I heard. Amazing blue, translucent blue, incredible tone of colorless blue water: you need to look carefully in these pictures to see that there is actually water in these little puddles. 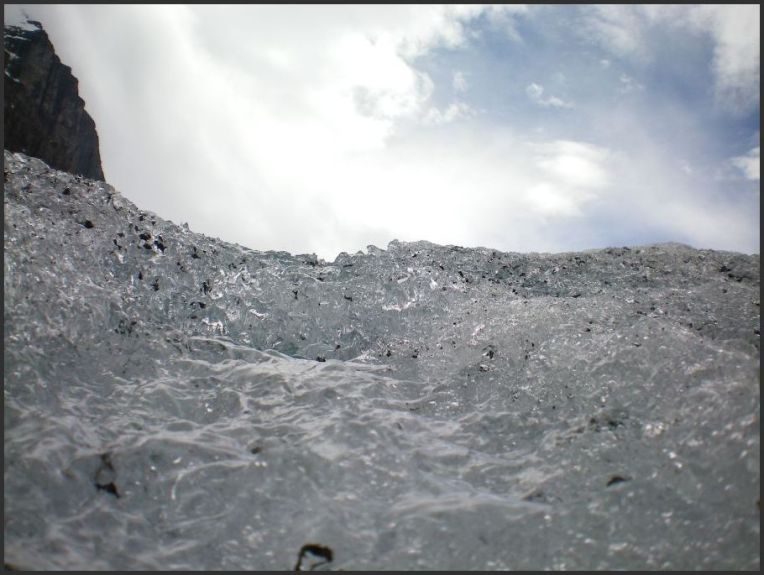 Witnessing how a bit of meting water can create its own hole and channel in the glacier, I no longer wonder how fast the glacier is melting nowadays. While waiting for the rest of the people from my vehicle to come in, the driver with another crew member tried to deflect the course of some water that was trying to form a little puddle right under our feet. Receding and melting at an alarming rate, losing half of its volume and retreating more than 1.5 km in the past 125 years, Athabasca Glacier is the most visited glacier in North America. 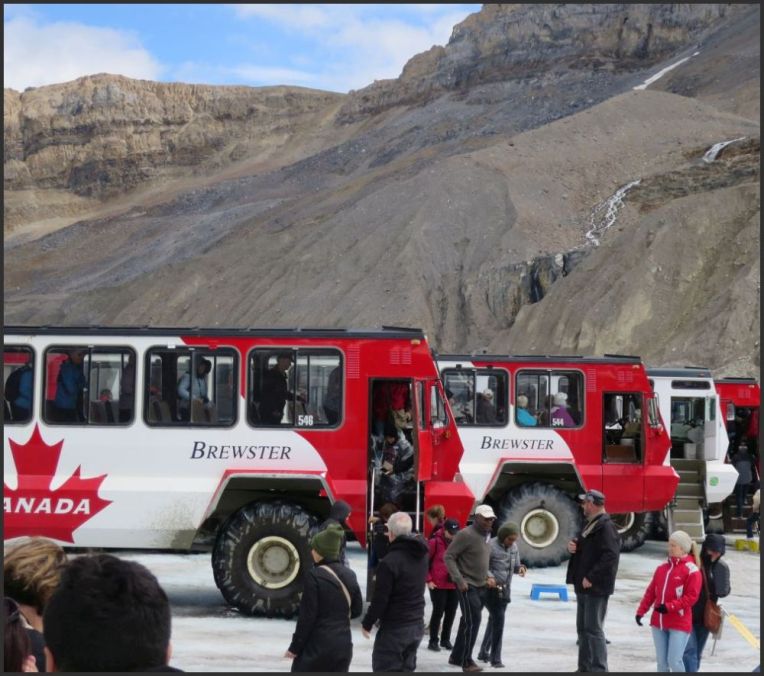 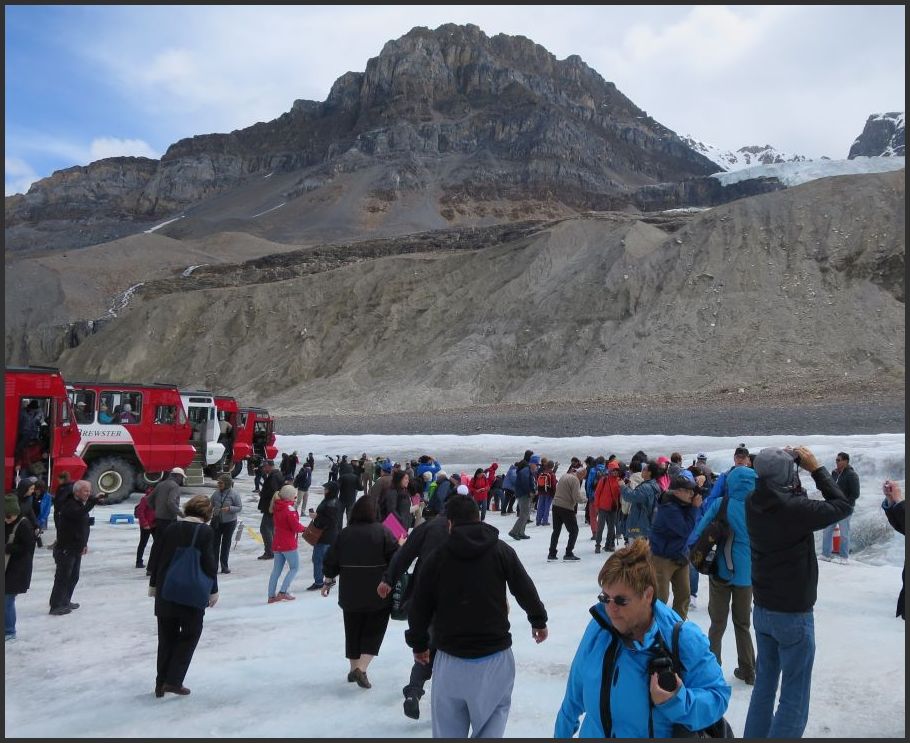