How to Peru in 2 weeks – Day #8: Getting to Cusco – Iglesia de San Blas – Plaza de Armas – The Cathedral – Templo del Triunfo – The Church of the Holy Family

Happy to get on the van, finally, I was all ready to relax and admire one more time the superb landscape of Sacred Valley where the main road would take us through, from Ollantaytambo (where we had our base for 4 nights) to Cusco.

The cheapest way to get from Ollantaytambo to Cusco was to get one of the many vans that run all day between these cities for a cheap rate of 10 soles. Our luck arrived before we even got to the main plaza; one van stopped and asked us “Cusco?” Before saying “yes” we jumped in the van right away, as a policeman was making signs already to the driver to keep moving.

Shortly after our first relaxing moments I noticed that the van had crossed Urubamba River and started ascending a hill that soon looked more like a mountain. Beautiful views, however both direction and landscape didn’t look right. Hmm, have we gotten on the right bus? Yes, we specifically asked a second time after settled in our seats. Where are they going to? Are they kidnapping us? What is going on?!..

Getting unsettled, I looked around, few more locals beside us, with their big bags of stuff. The driver was chatting with some people in a language we wouldn’t recognize. Yep, all locals speak Quenchua, randomly Spanish, and even less English. Luckily we had our offline map, and we grabbed our phone in haste, seeing the alternative route going to Cusco through the mountains. Phew.. we had to relax after all, and enjoy this new side of the mountain.

After passing few communities, we found ourselves right in Cusco, the city that was once the glorious capital of the mighty Inca Empire. Since 1983 City of Cuzco is a UNESCO World Heritage Site, and probably the most visited city in Peru, besides Lima. We didn’t know exactly what to expect, and we kindly asked our driver if possible to give us a ride to the address where we would stay for the next 2 nights. We didn’t know yet why he suggested taking a cab.

Besides a rich history, and its colonial architecture, Cusco is very famous for its narrow cobblestone streets. It didn’t take us too much to realize that only small cars would fit on certain streets, and only one at a time. As for the sidewalks, only if you know walking sidewaysJ 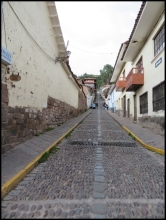 Cusco was founded in 1100 by a pre-Inca culture: Killke people, and was occupied by Incas in the 13th century. Manco Capac was the legendary founder of the Inca dynasty and culture, even though there are many legends surrounding his settlement and rule in Cusco. Some legends say that he was the son of Wiracocha, the creator deity, others that he was the son of Inti, the Sun God. Different versions state that he emerged from a cave along with his siblings, or from the depths of Lake Titicaca. Since Inca didn’t develop any writing system, the only written documents are from the Spanish priests from the 16th and 17th centuries, based on the mouth to mouth information. The only recording devices used by Andean cultures were Quipu, knotted strings used to collect data and keep records. Incan mythology continues to be a mystery, a continuous book to be discovered by the scholars, while new findings and interpretations occur with every new excavation.

Iglesia de San Blas was the first site to step in, within Cusco. Famous for its wooden pulpit, the church is rather unnoticeable from the outside. Considered one of the oldest parishes in Cusco, the church was built on an Inca sanctuary dedicated to the cult of Illapa, the thunder, and lightning god. With a golden altar, the most important feature of the church is the spectacular pulpit carved in cedar wood, which combines many biblical characters in a Churrigueresque style. The entrance ticket can be bought as a package with another two churches, including the Cathedral. The third one was unfortunately closed, as well as few other sites on the weekends. Still confused that some sites are closed in the weekends, I didn’t really pay attention when an old lady approached me and started offering some information in half Spanish, half English. Thinking she is a church representative (or maybe I just didn’t want to be rude to turn her back), I let her explain as much as she could. My total surprise was after 5 minutes or so, when she was offended by the money (1 sol) I offered, requesting instead 5 soles. I learned my lesson of not trusting the appearances.

After few more lefts and rights, Plaza de Armas laid in her whole splendor in front of our eyes. We got ourselves in the middle of the hustle and bustle of a big plaza, famous for all its adjacent buildings.

Like all other main plazas from the Hispanic American cities, this is the core, the hub of Cusco, the place where major events take place. An imposing statue of Tupac Amaru is hovering in the middle of the plaza, a perfect place to take some pictures.

Shaped like a latin cross, the Cathedral Basilica of the Assumption of the Virgin, known as Cusco Cathedral, was built on the foundation of the Inca temple Kiswarkancha, Virachoca’s palace. The cathedral construction started in 1559, and completed in 1654, and not only had the purpose of bringing the Christianity over Peruvian lands, but it also meant to remove the local religious temples and palaces. Actually two birds were killed with one stone, as most of the stones were brought from Sacsayhuaman, an Inca holy and defensive structure located on the northern outskirts of Cusco, but also Sacsayhuaman was desecrated at the same time with Kiswarkancha temple. It is said that even the sand that was spread over Cusco main plaza, which was considered sacred, was removed and used in the cathedral’s mortar.

The cathedral is built in a Gothic-Renaissance style, with Baroque influence and it is the highlight of the city. Beside many artworks and artifacts in the church, with imposing gold and silver altars, and wooden carvings, I was the most impressed by The Last Andean Supper painting, where a guinea pig is offered as a supper on the table. 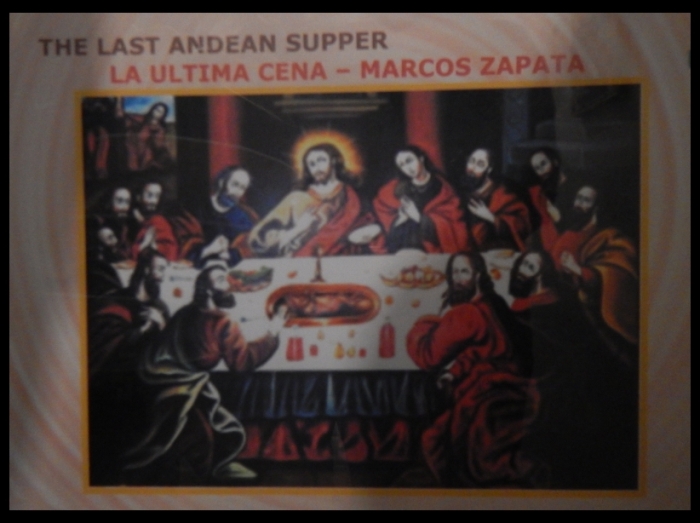 The entrance in the cathedral is done through an adjacent and smaller church on the Eastern side: Templo del Triunfo. The Church of Triumph, the first church in Cusco, was built in 1538, to praise the victory over the Inca. It is said that about 3 years after conquistadors came in Cusco, the Spanish were cornered by an army of Incas, led by Manko Inka. They were about to throw out the Spanish, when miraculously the Spanish managed to drive the Incas back. Honoring St James, the patron of Spain, whose victory was attributed to, the Church of Triumph was shortly built over Suntur Wasi, an Inca ceremonial building adjoining Viracocha palace; Spanish triumph over Quechuas, Catholic triumph over Inca Religion.

The exit from the Cathedral is done through another small church on the Western side: The Church of the Holy Family. 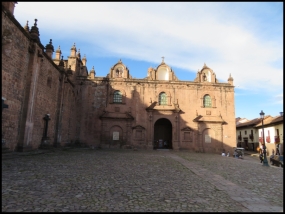 Cusco – The Church of the Holy Family

We spent the rest of the day exploring the surroundings; there were a couple of more churches nearby but closed, then we headed toward Plaza de San Francisco, a busy place even after dark.

*When entering a site, ask for a price before accepting what might sound like a free explanations/service;

*Ensure you walk at your own pace. Be prepared when planning to visit high altitudes. Coca tea and candies are the most common local remedies for altitude sickness;

*Some sites/churches are closed in the weekends, check their schedule when planning to visit them.

13 thoughts on “PE, Cusco: Discovering and exploring Cusco in our own way”